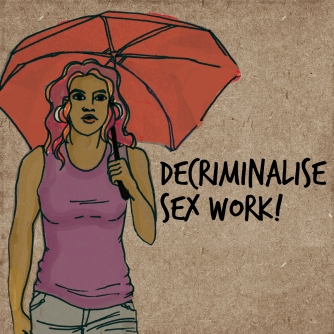 Coalition Against Trans Antagonism (CATA)’s work is conducted on the ancestral and unceded territory of the Coast Salish peoples, which include the xʷməθkwəy̓əm (Musqueam), Sḵwx̱wú7mesh (Squamish), and səl̓ilwətaɁɬ (Tsleil-Waututh) nations (colonially known as Vancouver, Canada). CATA seeks to work in solidarity with Indigenous peoples’ fight for autonomy and self-determination. This piece was written by a member of CATA who is a trans woman of colour currently engaged in the sex industry.

Originally conceived as a memorial and vigil for the victims of the Green River Killer in Seattle Washington, United States (US) in 2003, the International Day to End Violence Against Sex Workers is held annually on December 17 by sex workers, their advocates, friends, families and allies. The day calls attention to hate crimes committed against sex workers worldwide, as well as the need to remove the social stigma and discrimination that have contributed to violence against sex workers. This year, 212 deaths of sex workers were documented, the vast majority of whom are women of colour. Many of these same women were memorialized during this year’s Trans Day of Remembrance.

Here in Canada, colonial laws criminalize sex workers, as well as their clients, their drivers, and the owners and operators of the places where they work. This reality forces the industry underground and weakens the ability to combat strong-arming, exploitative labor conditions, and violence against sex workers. As a result, criminalization empowers and fosters violence against women, men and nonbinary sex workers.  Violence that has become a normalized part of the work environment for sex workers include sexual violence, psychological violence, and economic violence (where theft and robbery become common occurrences). The results are that the right to refuse unsafe work does not apply to sex workers. This is unacceptable.

On this 16th International Day to End Violence Against Sex Workers, CATA recognizes that:

On this 16th International Day to End Violence Against Sex Workers, CATA calls for awareness that violence against sex workers is a global catastrophe:

On this 16th International Day to End Violence Against Sex Workers, CATA works to remind us all that stigma increases violence:

On this 16th International Day to End Violence Against Sex Workers, CATA seeks to remind the public that sex workers are resilient and robust, and come from incredibly diverse backgrounds. They collaborate and stand up for each other to increase safety and resist violence. They organize bad date reports and participate in information sharing regarding dangerous situations, organizations, police, and people. They are safety buddies for each other and come together to support other sex workers who have experienced violence. They do their own research and draw from their immense lived experiences. Sex workers don’t need rescue. Sex workers deserve rights and they need solidarity in their fight for justice and liberation. Anything less is unacceptable.

Coalition Against Trans Antagonism’s work is conducted on the ancestral, traditional and unceded territory of the Coast Salish peoples, which include the xʷməθkwəy̓əm (Musqueam), Sḵwx̱wú7mesh (Squamish), & Səl̓ílwətaɁɬ (Tsleil-Waututh) nations (colonially known as Vancouver, Canada). CATA seeks to work in solidarity with Indigenous peoples in the journey for autonomy and self-determination.

Cick here! All proceeds go towards our organizing.